The other week I fulfilled a boyhood dream of riding along with a police officer. This post goes into detail about what I experienced and what I learned. If you don’t read any more of this post, I want you to know my biggest takeaway. The people of St Paul love and respect the police. Completely opposite from the headlines spewed by the media. After my ride along, I can see why.

I have known Officer Chin for 12 years. I was one of his youth leaders in our church. Ever since he was a young man he had aspirations to work for the St Paul Police. He has been an officer for several years and I have always been interested in his job and experiences, but leery of doing a ride along. He handles a part of St Paul that is known for drugs and guns. After hearing how much he loves it and that it isn’t as dangerous as the media portrays, I decided to try it. But I told him I would only go from 4pm – 8pm so it would be light out. I absolutely loved it, and ended up staying until after 11pm. Even then I didn’t want to quit, but he had to do a bunch of reports. I hope to go again soon.

The Accident and Traffic Stops

Our first call came as we got in the patrol car, before we even left the police station. A rollover on city streets. We were the first on the scene. Thankfully there were no injuries – seatbelt and airbag allowed the driver to “walk away”. One guy ran a stop sign and hit the other just perfect to roll the car over. The driver didn’t have a valid license nor insurance. In fact, few drivers that we stopped had a valid drivers license and I don’t believe a single one of them had insurance. Note to all: make sure your auto policy contains coverage for uninsured motorists. 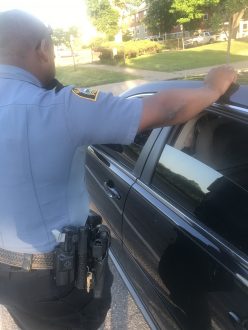 We did many traffic stops. I went up with Officer Chin to every one, just standing behind him. I could hear the entire conversation. The conversations were very respectful by both parties and in some cases there was some friendly banter – even with the person who he ultimately arrested due to several outstanding warrants. While everyone pulled over committed a moving violation (someone ran a red light literally right in front of us), he was not looking to write tickets. He was looking for outstanding warrants, guns, drugs and connections to wanted suspects. He works a tough area and his job is to keep the families and kids safe. As we drove down the neighborhood streets slowly (neighborhood patrol), he would often wave and say hi to those walking on the sidewalks. Community outreach, being present and establishing trust are significant parts of his job.

On the ride along, we went to an accident, had many traffic stops, took someone to jail and responded to three domestic disturbances. Officer Chin said domestic disturbances are the ones that get him most concerned because they can blow up in a hurry. On every call there are at least two police officers that respond. I went in and was next to Officer Chin or his partner the entire time. The disturbances were mostly the officers listening to the parties and helping them calm down. In one case, the police escorted a woman out of the building so she could go spend the night elsewhere. Alcohol and drugs are the fuel behind these disturbances and result in future callbacks to the same residences.

Love for the Police You Don’t See on the News

Being in the sister city to Minneapolis, with all the bad press, I asked Officer Chin about the “bad cops” out there. He acknowledged there are bad ones, and the need to get them purged out quickly. But that most of the cops are family men and women who love their jobs and are doing their best to protect and serve. I can attest to that as I got to know his partner and interacted with several other officers during the shift. I guess it is like any business. There are bad apples in corporations, religions and just about every facet of society. But that doesn’t make them all bad; notwithstanding the picture the media paints.

Throughout my seven hours with Officer Chin it was apparent how much the people he serves appreciate him. We stopped a few times to get waters (it was 95 out that day) and the owners of the businesses refused to let us pay. People were friendly to the officers, striking up conversation and asking if they needed anything. Perhaps the icing on the cake was the very last call we went to. It was close to 11pm and a few officers responded to a situation in which a guy ran away from his parked car upon seeing the police. A run of the plate found that the car was wanted by a neighboring city. As they were waiting for authorization to impound the car, a car drove slowly down the street, the driver rolled down her window and thanked the officers for taking care of the neighborhood. It was heartfelt.

I hope the reader believes that blue lives matter or at least will open their perspective to the many great police officers out there. Perhaps the most amazing thing is that no matter what you think or feel about them, to the vast majority of police officers – all lives, including yours, matter to them.