Never. I could end my blog there, but I think it is interesting to understand the psyche of an individual who would do such – and what that says about our current economy.

The WSJ recently reported that while refinancings are down, there is still decent demand because people are refinancing to take cash out of their home. In other words, the economy is so good that homeowners need to increase their debt to continue spending. 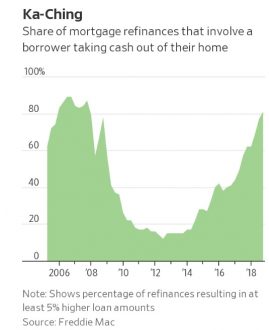 As the chart shows, the last time we saw such so many cash out refis was in 2007 and 2008. Back then interest rates where higher, but they were relatively flat. Meaning people were exchanging like interest rate for like rate. However, now they are refinancing into a higher rate. So, not only do they owe more, they are locking in a higher rate. Double whammy. What does this say about the psyche? Desperation?

Now, you could say that their home price has increased and they have repairs/upgrades to make, or want to pay off credit card debt. I get it. But home prices haven’t moved much in the last few months. And they could take a line of credit so their primary mortgage retains its low rate. So why did these people not refinance when rates were much lower and they had equity in their home? Did they not think about it? Did they want to pay a higher interest rate to the bank? Or is there something else going on here…

Spending is a Behavior

I really don’t know the answer, but I do know that spending is a behavior. Many financial professionals acknowledge that the spending side of our financial profile is as important (actually more important) than the income side. There are several public examples of millionaires declaring bankruptcy because they couldn’t change their spending behavior, despite depleting their assets. Michael Jackson, Mike Tyson, Evander Holyfield are just a few that come to mind. I’m sure there are many private examples.

Could the velocity of income be slowing down? Is the party about to end? Maybe the end of quantitative easing and the “high” from last year’s tax cuts are wearing off, and people are realizing their prosperity of the past few years was more a mirage than a reality. Maybe they don’t want the punch bowl taken away quite yet. Or maybe they like paying origination fees and higher interest expense.

Lots of questions. No answers. But generally the last thing to go is a person’s spending habits. Increased debt and depleting assets are much more likely outcomes in our ego-filled society than actually cutting back and living on what we make. But then what would everyone think of us? That would require sacrifice! Better to just refi into something more expensive.

This has been more of a sarcastic rant. But I am just amazed at what is happening. I don’t know the underlying reasons. But this serves as a great reminder that we need to watch our spending. Much easier to make cutbacks in times of relative prosperity than when we are barely hanging on by a thread. Economies go in cycles. Therefore our prosperity goes in cycles. Yet our spending tends to stay stagnant and only move up…to our eventual peril.

Spend and save wisely.