I loved the show Lie to Me. I was terribly disappointed when it was canceled after a few seasons. I secretly hope that they bring back the show at some time in the future…preferably tomorrow. The premise of the show is a company of nonverbal experts who can tell if someone is telling the truth or being deceptive. It enlightens the viewer to the concept of nonverbal communication.

There are many ways in which we communicate nonverbally, from demonstrating attraction to deception. The eyes tell a lot about a person and what they are communicating. So do facial features. And while the human race speaks various foreign language, the language of the nonverbal is universally the same. Even when we don’t understand someone speaking in a foreign language, we can often understand how they are feeling through their nonverbal cues.

First off, it is not recommended trying to become a nonverbal expert. Studies have shown that even the professionals, those that devote their entire lives to reading nonverbal behavior, can detect deception with the same accuracy as a coin toss. Having said that, there are a few main points that could help you interpret nonverbal communication better. Careful observation is essential to master these:

1. Recognize Pacifying Behavior. These gestures are caused because the brain is uncomfortable and needs to stimulate nerve endings somewhere to pacify the brain. Common gestures are touching of the face and rubbing palms down the legs (when seated).

2. Establish a Baseline. How does the other person act normally in various situations? Do they always touch their face or rub their hands down their legs? If so, then that gesture may not signal anything. It needs to be a deviation from the baseline.

4. Don’t Overreact. When you see an obvious behavior, you may want to ask additional questions to better understand and get them to verbalize how they are feeling and what they are thinking. Calling them out on their nonverbal communication may worsen the situation.

You’re Lying to Me 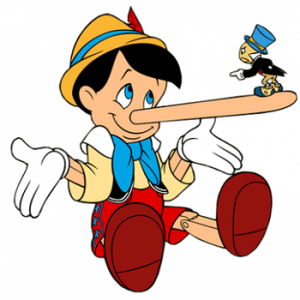 So let’s say you have detected an obvious nonverbal gesture. You are certain that Jack is lying to you because of the obvious way he started touching his face when you asked him where he was last night. He never touches his face. If you call him out on it by saying, “Jack, I know you are lying to me. Just fess up”, it may exacerbate the nonverbal gestures and cause Jack to get defensive. In such a case it is better to simply ask clarifying questions, such as “That doesn’t make sense. Why did you go there?”, or something to that nature.

The reason not to jump to conclusions, even when the nonverbal gesture is obvious, is because often the subconscious gesture given for deception and stress are the same. We can’t identify the difference.

When I was a child I had an obvious subconscious and uncontrollable facial gesture when I lied. My parents and sister called me out every time. What is interesting is that any time I am accused of something, I get the same gesture…even if I am not at fault or lying. I can feel it happening, but have no control over it. That is because the stress of being accused causes the same subconscious reaction. And it is worsened by others claiming I am lying when I am really telling the truth.
Be careful about jumping to conclusions.

How to Apply in Daily Life

There are so many nonverbal cues, it would be insane to think we could master them all. And even if we could, we would arrive at the wrong conclusion roughly half of the time. But that doesn’t mean nonverbal communication is not valuable. It is…so long as it isn’t taken too far.

The bottom line is that if someone is acting differently or something “isn’t right”, then something very well may be wrong. Your gut and intuition may have picked up on nonverbal cues that your conscious brain did not, and are trying to communicate it to you. But rather than calling someone out, use that information to probe deeper. Ask clarifying questions.

Sometimes I like to fold/cross my arms when speaking with others. I don’t know why. The nonverbal I am supposedly showing is a defensive posture. If you were trying to use nonverbal on me, you would wonder why I was being so defensive and may ask questions about that. But here is another problem. Crossing the arms can be a defensive nonverbal behavior, but it is also a common behavior for people who are thinking about and absorbing the conversation. Finding a baseline is essential.