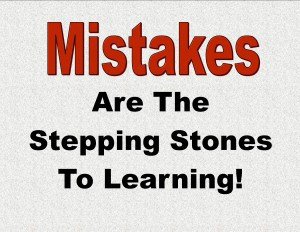 Memorial Day – a day in which many Americans go to the beach, cabin, boat on the lake, have a BBQ and share it with friends and family. According to retail ads, it is also a great day to shop and take advantage of the great bargains. But we should not forget the real reason for Memorial Day. We remember men and women of the military that sacrifice their lives for our freedom. In that spirit, I dedicate this blog to the importance of remembering. This includes remembering our mistakes.

It is human nature to want to forget our mistakes. While it is unhealthy to dwell on our mistakes, it is unwise to not learn from them. Mistakes, when thoughtfully considered, help us progress in life. Yesterday’s mistakes can help us grow and progress tomorrow.

When evaluating past mistakes and trying to improve from them, the following three items may be of help:

This requires introspection. What caused the mistake? Here are two scenarios to serve as examples:

A) John snapped and criticized his son for not doing a good job on his chores. While the chores were technically done, they lacked in quality and attention to detail…his son went through the motions but didn’t put forth any effort. John needs to identify what caused him to snap. He needs to think about what irks him about the situation. Upon reflection, John realizes that he gets frustrated by his sons lack of work ethic when it comes to chores and is concerned that “laziness” will influence who his son becomes. He also realizes “snapping” occurred at the end of a very exhausting day. John’s concern for his son’s long-term success and being tired were triggers for his snapping.

B) After hearing negative reports on a stock and noticing the loss on his investment, David sold a stock he purchased just one month ago. He has since realized the loss was temporary and the stock is now at a much higher price than when he sold it. David needs to realize why he purchased the stock in the first place. In this case, he had been hearing about the stock for some time and thought it would make a lot of money. He didn’t put much thought into what to expect from the stock except for it to make him money. When it started losing him money and the media had negative things to say, he panicked and sold the stock. The media was the trigger to buy and sell the stock.

If you don’t define the exact trigger of the mistake, it is impossible to improve on it. Next time the trigger occurs, if you don’t identify it you will likely make the same mistake.

Looking back on the situation, what outcome would be preferred? This is a fairly simple, yet important step because it provides a specified goal for next time. Continuing with the scenarios above:

A) A better outcome for John would be to not snap and berate his son. Instead, he would prefer to discuss with his son why he wants him to develop a strong work ethic.

B) A better outcome for David would be to not make impulsive investment decisions and not allow uninterested 3rd parties (i.e. the media) to influence his decisions.

So far you have identified what caused/influenced the mistake and defined a goal for how you want to improve next time. Now the most important step is to create a clear and simple plan for how to improve your future behavior and obtain the desired outcome.

A) The next time John is tired, he will take a deep breath and forget about it until the next day. During that time John will put himself in his son’s shoes and realize that when he was kid, he didn’t enjoy doing chores either. John decides to talk to his son now, rather than wait for the next outburst, to explain the value of work ethic and character, even in jobs that are not fun. He will also encourage his son to do a better job with future chores and discuss incentives that may help him.

B) The first thing David is going to do is write a specific plan for investing in which he defines parameters for stocks to buy and sell. He is also going to engage a financial professional to help him avoid impulsive decisions, ignore the noise of the media and provide discipline to the plan.

We all make mistakes. I make many of them. Some have been embarrassing. The tragedy isn’t the mistake, it’s not learning from the mistake. May we take a moment to remember past mistakes and figure out what we can learn from them and create a plan to make sure next time we obtain a more desirable outcome.