A new year is always a great time to reflect on what we have experienced and learned from the past. And for investors, 2016 gave us quite a few good lessons. Unfortunately, most investors just look at the numbers and think “woulda, shoulda, coulda.” Investors seldom take time to reflect on what happened, how they responded and how to improve our investment behavior in the future.

Let’s take a brief stroll down memory lane. We started the year with headlines such as “Investors Have Low Expectations for 2016” and “Bad Week for US Stocks Dims Outlook”.  These seemingly prophetic headlines and subsequent sell-off in January and February influenced many investors to head for the sidelines. In early February, we saw headlines such as “Dow Plunges as Investors Retreat”. Pundits were quoting the January Effect – which is a highly unreliable prediction that what happens in January is a precursor for the year. How worried were you? Did you sell or at least consider selling? Be honest. 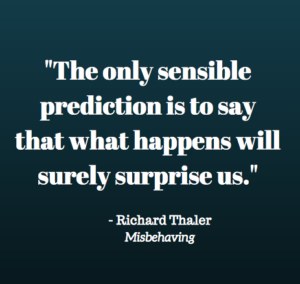 We also had the Brexit and the unexpected Trump victory. Those surprises resulted in knee jerk reactions of selling stocks, but they were both very short lived (Brexit – few days, Trump – a few hours). Overall, the stock market was up only 52% of the days last year. You may think “Whoa, that is volatile!” But the stock market historically is up only 53% of the days (BTN Research). So as abnormal as 2016 was, it was actually quite normal.

This is a great lesson of what is normal in the markets. Normal means unexpected, unpredicted events will occur. Normal means the media will scream from the rooftops and take advantage of our discomfort with uncertainty and aversion to loss. Normal means the market will be up, on average, roughly half of the days. So as we project going forward, it may be wise to consider what a real normal market looks like – and what it doesn’t.