This last week for Spring Break my family vacationed in Orlando, Florida. We were there for five days and as part of the vacation we had purchased a 3 day pass to DisneyWorld. We stayed at a hotel/resort that had several nice pools as well as activities for adults and kids. Our plan was to spend 3 days at Disney parks and the other 2 days at the hotel enjoying the pools, sun and activities. As with most plans, sometimes changes need to be made on the fly to optimize the experience and outcome.

After spending two days at Disney parks and two days enjoying the hotel pools, we discussed which Disney park we would visit on our last day since we had purchased the 3 day pass. It was then that we realized that none of us wanted to go to a Disney park again. We had a good time while we were at the parks, but the fantasy and expectation of going to Disney was more enjoyable than the actual experience. The long lines, sea of people and our kids’ complaining about the lines and people made it difficult to have a “magical” day. After our Fastpasses had been used on the good rides, the only options were to wait 30 minutes for mediocre rides, watch the afternoon parade and go to the Hall of Presidents. We did go to the Hall of Presidents in which I slept for about 20 minutes of the 22 minute presentation. I highly recommend it!

Normally this decision would be a no-brainer: obviously if no one wants to go to Disney, we don’t go. But we had already pre-purchased the 3rd day. It was “free” to go to a Disney park. And to not go would mean that we just wasted $390 by purchasing a pass we didn’t use. I do not like wasting money. This was the dilemma. 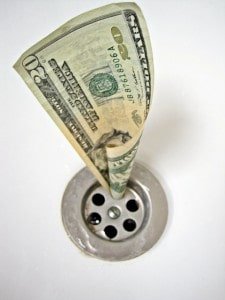 The moment we purchased the 3 day Disney pass, it became a sunk cost. It was not refundable and could not be recovered in any way. It was clear what we wanted to do…stay at the resort. Yet, the potential of “throwing away money” made us think about whether we should do something we don’t want to do just so we don’t waste the money we had already spent. We can thank loss aversion for that temptation. Loss aversion is when the pain of losing something is more intense than the joy of gaining something else. In this case, the loss was paying for a day at Disney, but not going. Loss aversion was causing us to irrationally consider doing something we didn’t want to (go to the park), rather than doing what we really wanted. Sunk costs and loss aversion can cause many people to make decisions that do not reflect their true desires.

Loss aversion is an emotional bias. It would not be wise to tell someone to not feel a certain way or to argue that their feelings are irrational. Instead, we should treat loss aversion as a personality trait and invest according to that constraint. One approach is to identify the investor’s threshold of pain. Identifying how much, in dollar terms, could the investor lose before losing sleep at night would be a good start. Once that is defined, a portfolio of securities could be constructed that would minimize the probability of breaking through the threshold.

A New Approach to Dealing With Loss Aversion